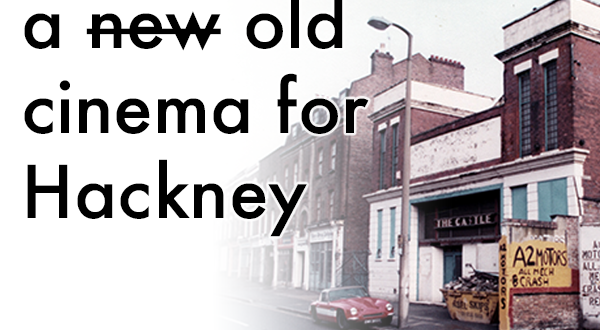 On March 1st 2016 Pillow Cinema launched a Kickstarter project to revive The Castle on Chatsworth Road as a full-time, permanent cinema.

If successful, it will become one of only two independent cinemas in Hackney, alongside the Rio in Dalston.

“We want to create a space which is inviting and accessible. Somewhere to celebrate the full breadth of cinema from independents to blockbusters, an affordable venue for community organisations to hold events and for local filmmakers to screen their works.” say Asher & Dee of Pillow Cinema

They plan to screen a wide variety of content, including new releases, arthouse & foreign language, and well-loved classics & sing-alongs. There will also be specialised screenings such as Seniors, Babes-in-Arms, live content, film festivals and other forums.

The project is being pitched as an intimate & affordable local cinema with a single screen and seating for approximately 60 guests. The team are hoping to open in June 2016.

The original cinema opened as The Castle Electric Theatre in 1913, and ran until 1958. It then became a bingo club and snooker hall. It remained dilapidated until 2014, when local shop & restaurant owners Eat17 took it on. Fifty years on from its last film screenings, this historic building & many of its original features can still been seen. With the ground floor back in use Pillow Cinema approached them with the idea of reopening the first floor as a cinema.

“So often we see lovely buildings disappearing, being turned into flats, or otherwise lost for public use. So we’re bloody chuffed to have the chance to revive this historic cinema…”

With four years of pop-up cinema under their belt, Pillow Cinema are well placed to lead this campaign. In 2012 the team first launched Hot Tub Cinema on a rooftop in Hackney. The city’s enthusiastic reception gave them the encouragement to keep sharing new projects, and in 2014 they launched Pillow Cinema – a less-aquatic format suited to a wider range of films.

With this crowdfunding campaign they need to raise £45,000 to cover crucial equipment – a cinema system capable of playing the latest releases as well as older titles, and materials to restore the empty space into a fully functional auditorium, including seats and lighting.

Their Kickstarter rewards include tickets, membership, private hire, and even “Lion Face” – the opportunity to be filmed impersonating the famous movie roar, and have it shown before every movie for the year!

“The opportunity to revive one of London’s original cinemas and make a lasting contribution to London’s cultural heritage is very exciting. But we need to know that our friends, past guests and local community share our dream. Crowdfunding enables us to share the journey, and after all, they’re the people we’re doing this for…”

The Kickstarter campaign will be running until 30th March 2016, and is “all-or-nothing” – meaning they have to raise the full £45,000 or they will receive no funds whatsoever.

You can support the campaign by visiting www.pillowcinema.com.